In 1966 Roamer revamped its range into, Anfibios, Stringrays, and Mustangs.

In 1966/67 the Stingray range started with bezel styles 600, 601 and 602 – within these cases there were a number of dial options. All three were waterproof dress watches, examples: 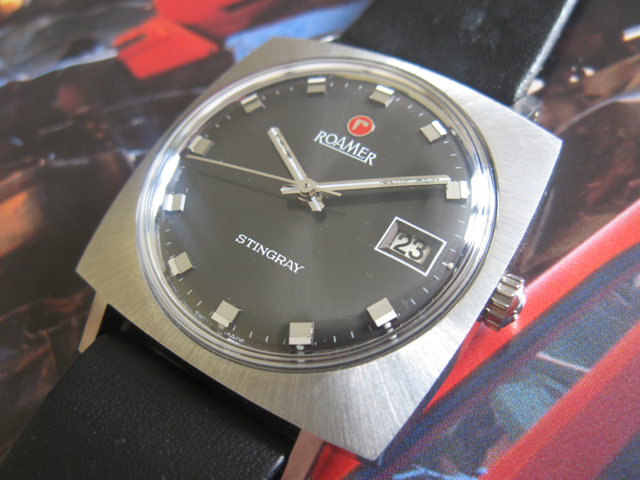 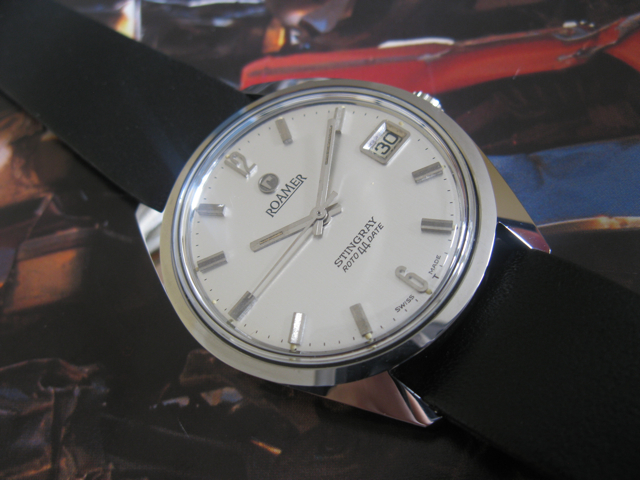 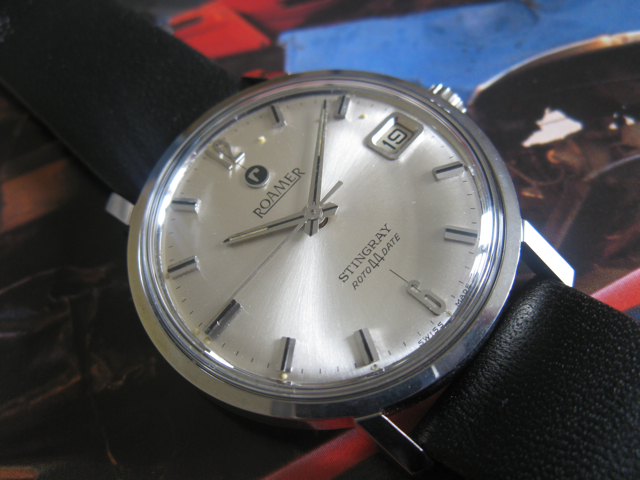 At this time there was also a prototype Stingray S a 200m Diver, announced in 1966, but seemingly not available until late 1967. The 1966 prototype as shown in the initial advertising (from the 1966 Basel expo) has a number of small detail differences from production versions – most significantly, crown at 2 rather than 4. The large crown at 3 rotates the internal timing bezel. 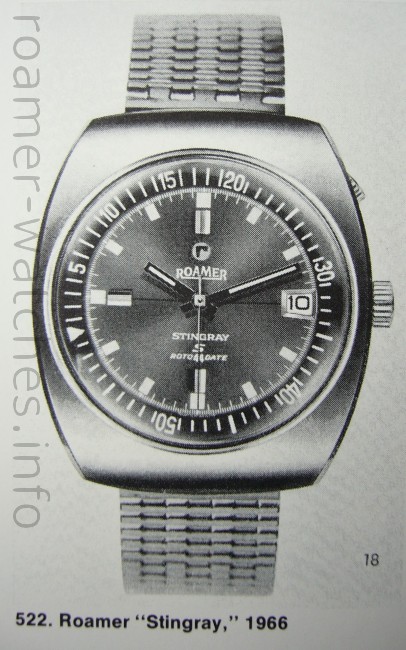 I believe this is the earliest production model brochure, showing clearly the first dial design, and only minor differences from the prototype above: 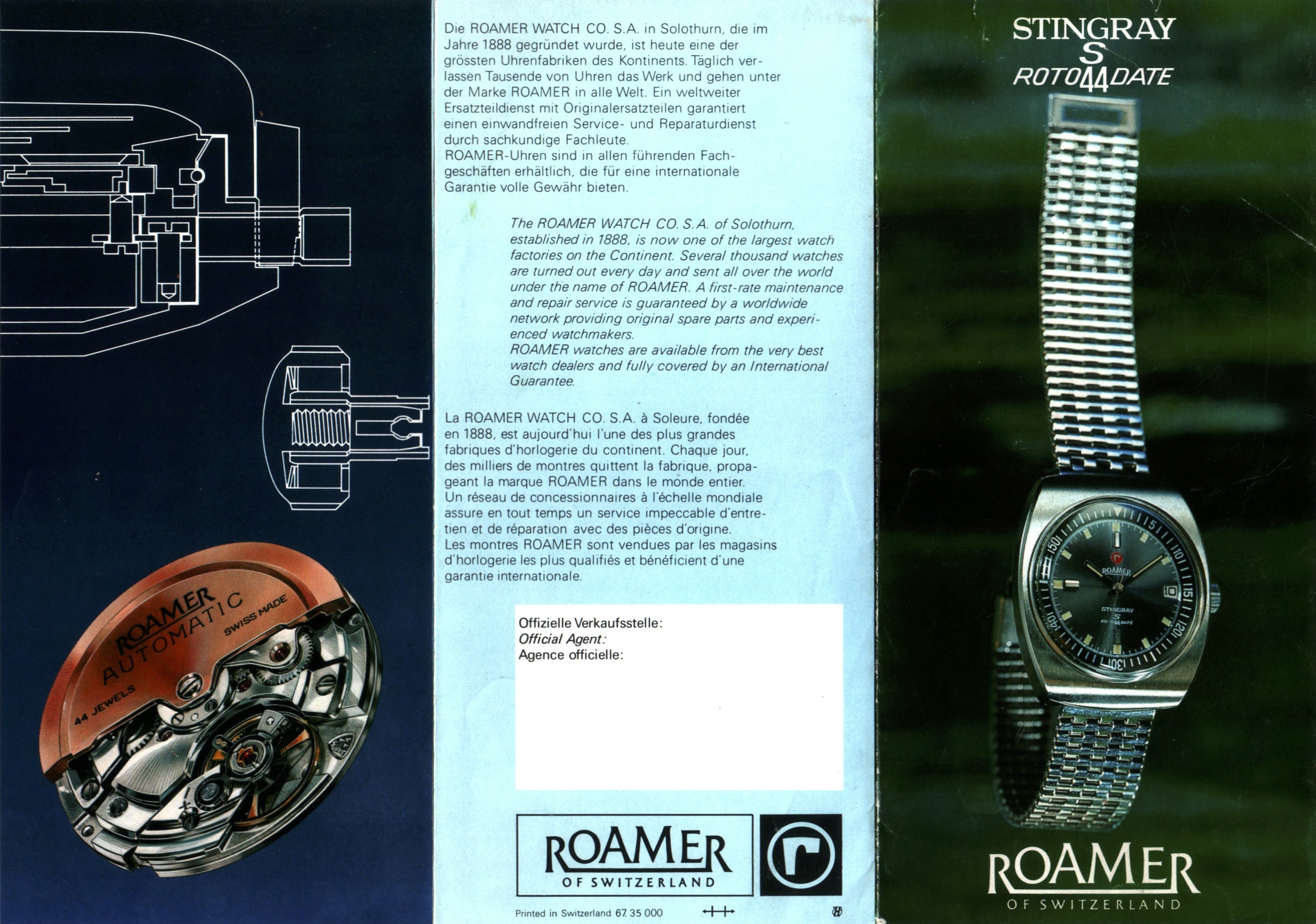 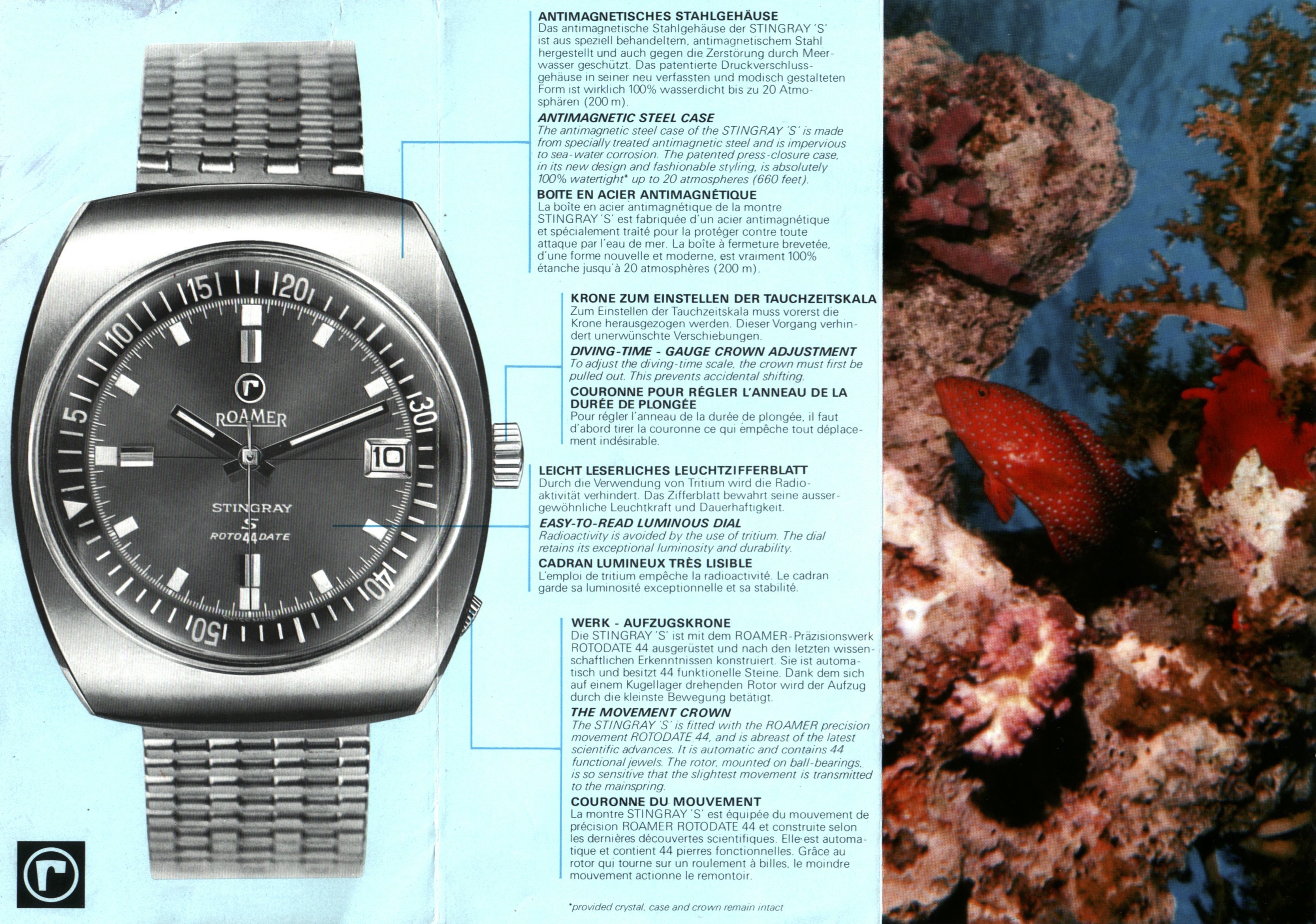 In September 1967 the Roamer Stingray S was awarded a Design Gold Medal at the Leipzig trade fair: 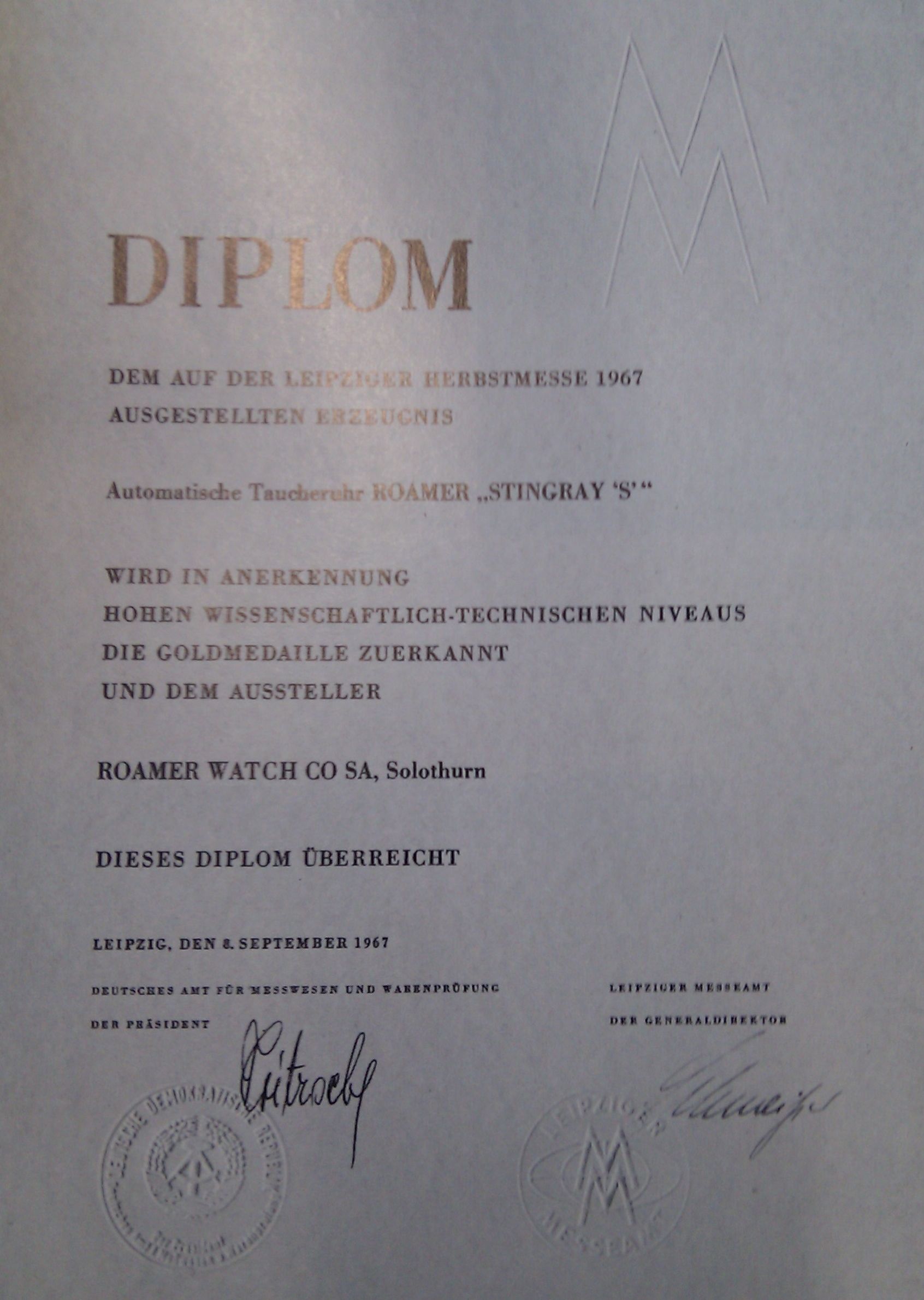 The very first production model (This salesman’s sample is marked 1968 on the back) is generally the same as the prototype, including baton hands – but with the crown at 4 like all other production versions:

1968/69 Model Stingray S – the major difference being the hands. 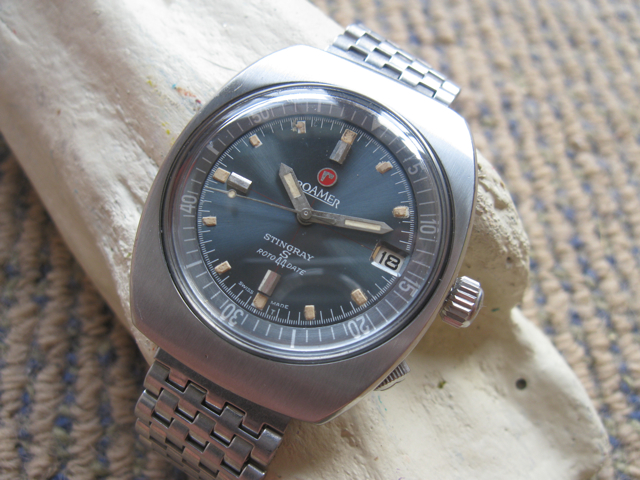 The Stingray S was a significant success, and the range expanded in 1969 to include the first Stingray Chrono powered by the Valjoux 72. This watch also used the patent Roamer waterproof case design.

The 1969/70 Model Stingray S – changed to utilise the 28 Jewel version of the MST 471 automatic movement, a matt crosshair dial and new hands. The internal bezel dot changed from a triangle to a dot. This watch was the last appearance of the “rotodate” marking on the dial. 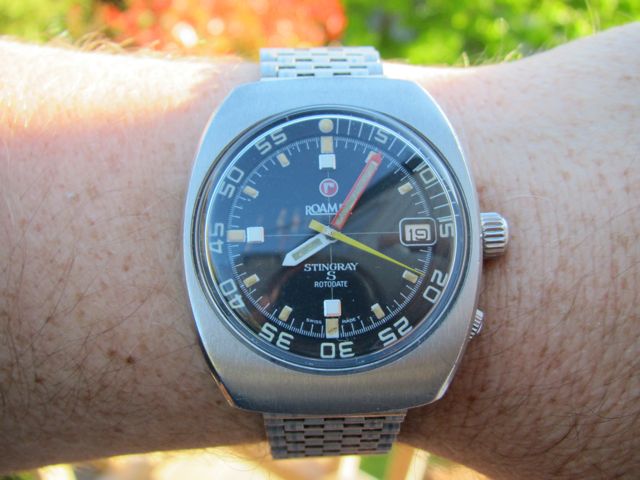 The 1970/71 Model Stingray S – saw a major case update, now style 605, with the case given an asymmetric crown guard and a new dial design with tritium lume, new markers and deletion of the crosshairs. In addition, the strap size was changed from 18mm in the earlier 602 models to 20mm in the later 605 models – the new strap featured with a brick pattern and signed Roamer. This year the internal bezel numbers became orange. 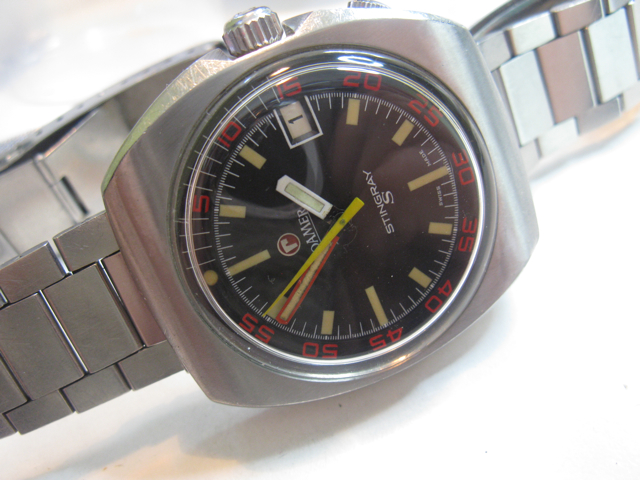 The 1970/71 Model Stingray Chrono received only a minor update with the sub dial hands getting the ‘candy stripe’ treatment. 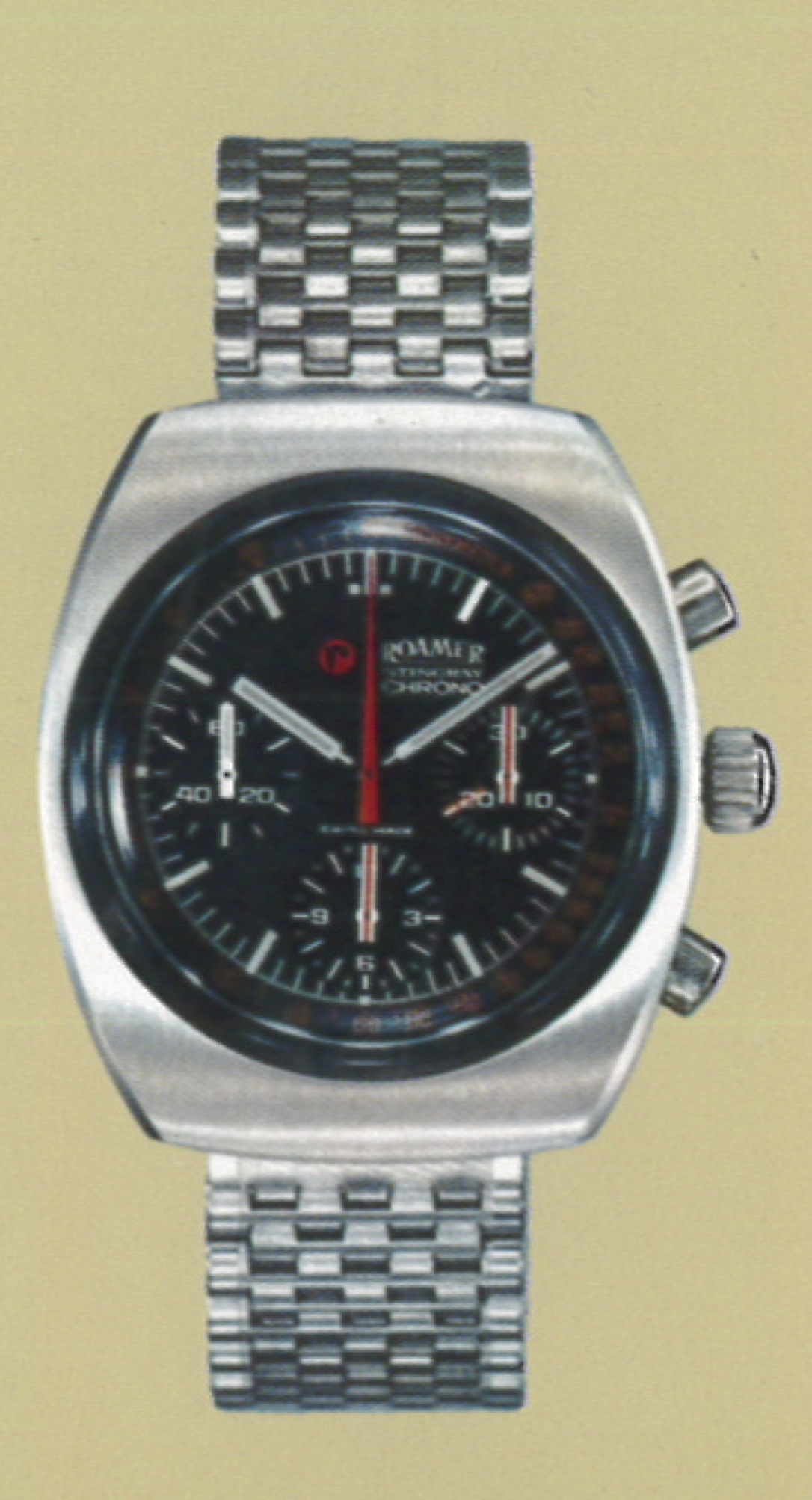 The major Stingray news of 1970 was the introduction of two new Stingray Chrono models – the enormous Chrono-Diver (CD) and the Jet-Time (JT), both powered by the Valjoux 23 movement. The only real difference between the two watches was the outer bezel, the JT featuring a 12/24hr markings. Note the brick linked bracelet. 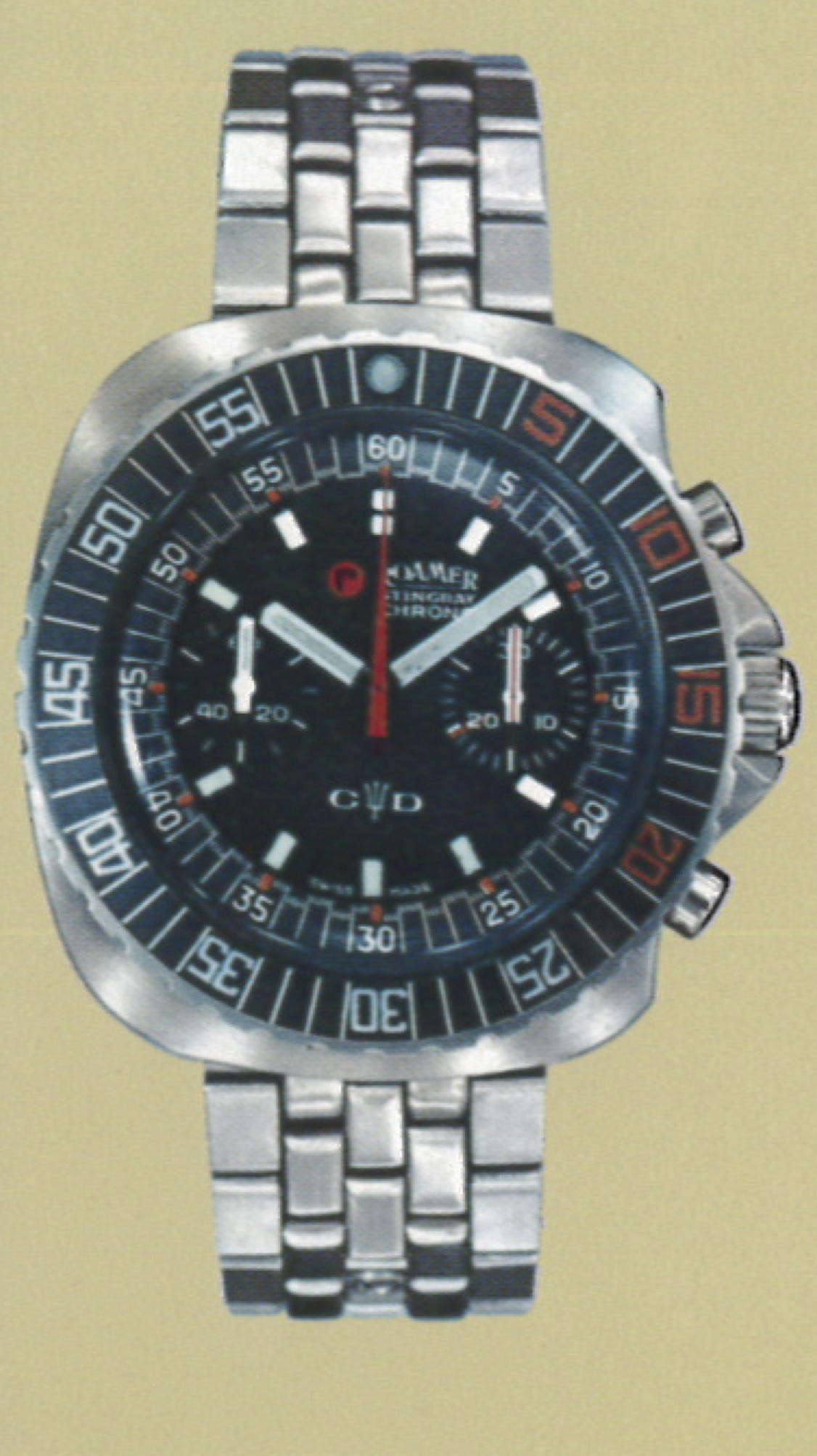 The 1971/72 production year saw minor and major changes all around. The Stingray S reverted to white bezel numbers and a new Rockshell strap was factory fitted. The Stingray Chrono Valjoux 72 was unchanged while the Chono Diver now used a new movement, the Valjoux 7733 or 7734 depending on date option while Jet Time only came with date and therefore a Valjoux 7734. These were referred to as MOD 733 and 734 respectively.  Here is my 7734 powered w/date Chrono Diver model, shown on the correct bracelet: 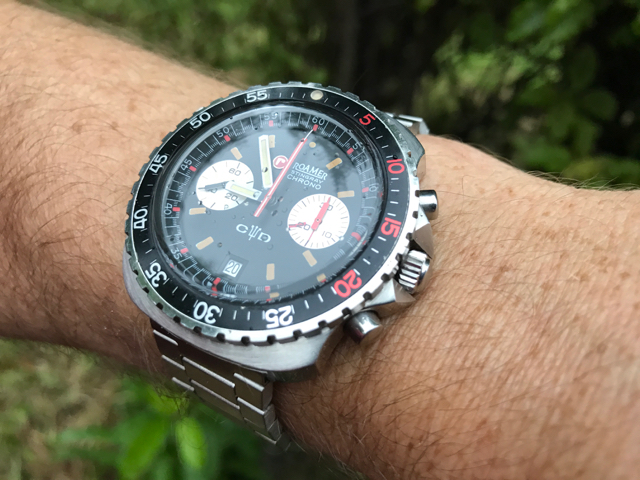 The 1972/73 no changes to the S Stingray Chrono or the Stingray Chrono Diver. However a new model of Stingray S was introduced alongside the original model, with an external bezel rather than internal:

1973/1974 The only Stingray model remaining in the 1973/4 model year was the Stingray Chrono Valjoux 72 (726) which was discontined in 1974 when production of the Valjoux calibre ceased. The final 1973 models featured non tritium lume and white subdials. 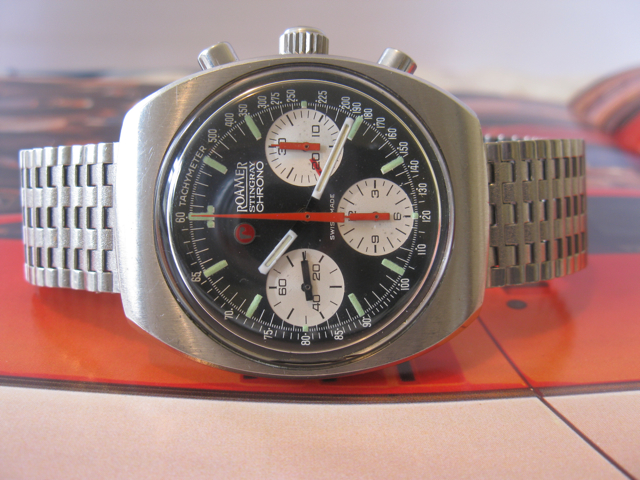